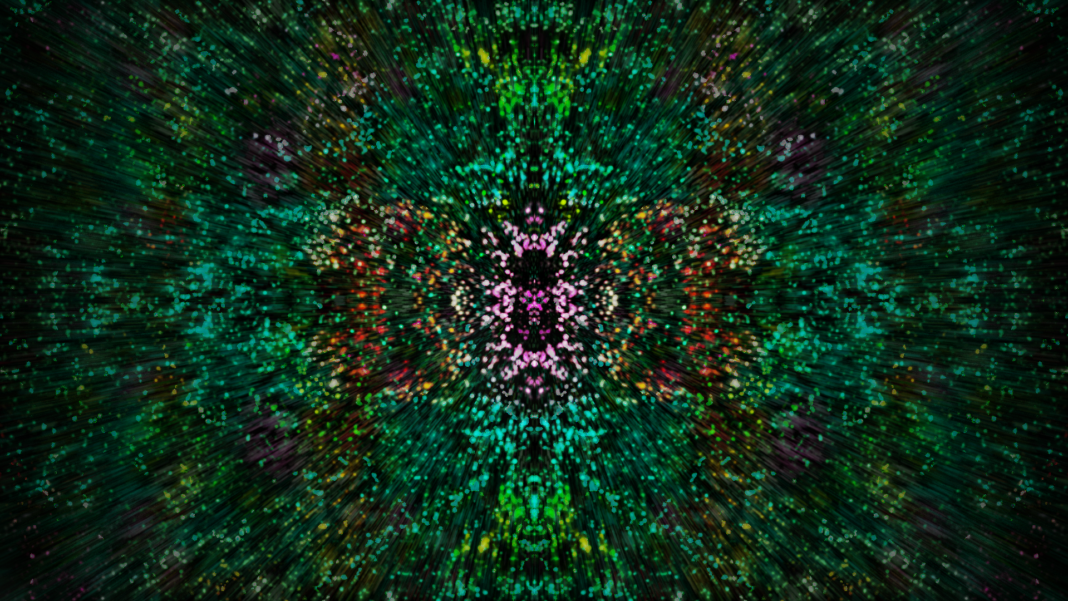 Freaky people, I am returned! With all critters of the earth chirping, buzzing and singing their songs, it’s time to dust ourselves up and get the blood pumping again. I’ve chosen one of my favorite albums as the catalyst for this instantaneous metamorphosis, namely:

“A Wound in Eternity” by “Farflung”. Farflung are an American band that originated in Los Angeles, California. I can try to present them on my own, but the description on the webpage of one of their labels is too awesome to ignore. And I quote:

“Like a cosmic capsule sent from deep space …..Farflung have been altering people’s minds with their dive bombing moogs and hypnotic riffs for the last twenty years.

Torchbearers of the psychedelic underground they have been championed by the likes of Helios Creed (Chrome). Henry Rollins, and Voivod. They have collaborated with numerous musicians including Nik Turner (Hawkwind), Damo (Can) and Dave Catching (EODM, QOTSA) to name just a few…

Their music has appeared in films and television including The Fox show ‘The Following’ starring Kevin Bacon.

Brothers and sisters they are once again readying their ship for flight….hop aboard…Another the trip is about to begin….”

If you’re unfamiliar with the pantheon of progressive rock and its subgenres, you’d be forgiven to think of the names mentioned as taken from some Flash Gordon offshoot comic series. What is progressive rock? It’s a huge umbrella term that encircles artists like Pink Floyd, Porcupine Tree, Kansas, Rainbow and part of the artistry of the great David Bowie. So, yeah, pretty diverse.

There’s a gazillion subgenres, and some of my favorites include psychedelic, desert, stoner and the star of today’s piece – Spaaaaaaaaaceeeeeee RRoooooooockkk. I already smell the next question cooked in your mind – “But, Mr. Dude-man-guy, what is this space rock then?” It’s a style that incorporates reverberating riffs and echoes from a place beyond known space. You know, space-rock, man. The first prophets to capture its proverbial melodies were the mythical Hawkwind (mentioned above) that emerged all the way back in 1969 and are still going strong today. If you’re even mildly intrigued by any of this, definitely check them out. We salute you, legends!

The Wave Of Existence

The pioneering efforts of Hawkwind inspired a myriad other stargazing freaks of nature to create on their own, which brings us to Farflung. Grooving around since the mid-1990s, they’ve crafted eight studio albums to date[1], all of which would plenteously supplement an afternoon of getting baked. For me, the best work of these beasts is undoubtedly A Wound in Eternity. In fact, it’s one of my all-time favorite albums. It’s adventurous, powerful, dark, grandiose and awesome to the power of a hundred billion all at the same time. I love it!

It’s one of those rare artefacts, which provide the necessary spiritual-emotional fuel that empowers the brain to produce the most important known resource in the Universe – the Mojo. The Mojo is what I call that feeling of flow, like gliding or dancing on the thread of reality. It’s a bridge to the Matrix. Imagine standing in front of a mirror, looking at yourself and doing all kinds of weird movements and faces. Whatever the buffoonery, the image in the mirror always mimics everything…or is it the other way around? The point is, there’s a mutual understanding between the worlds on the two sides of the mirror, an intersection point. That’s the Mojo – an inherent understanding that when you do X, Y will happen, or the other way around.

Similar to playing “Simon Says” or shouting in a cave and waiting for the echo to come back. It’s the mother of all creativity, adventure, improvisation and skill. The ideas crank is turned to the max and the imagination soars into the exosphere. The Cosmos is revealed as a clockwork mechanism and you can see every teeny-weeny tiny-winy wheel and cog that turns and ticks, including yourself. Of course, there’s no way to control it, but you don’t want to do that anyway, because the distinction between “you”, “it” has disappeared at that point. You’re riding the gigantic wave of existence and all there is to do is wiggle your feet and shout “Wheeeeeeeeeeeeeee” as loud as possible.

So, yeah, a pretty awesome and cool feeling!

And it’s exactly what I get whenever I listen to this album. Since my description is subjective as shit, I’m curious to find out how you monkeys feel about it – give it a listen and don’t hesitate to share! The entire compilation is one continuous piece of music, where the outro of each individual song flows into the intro of the next one. Pretty sure there’s a term for that, but I’m too lazy to search for it. It’s a classic rollercoaster of emotions – cheerful and flashy in the beginning, while progressively clawing deeper into the unknown. The journey can be chronicled as follows:

These is what the album does to my soul and imagination. It transmits an underlying sense of a boundless, magnificent force that disintegrates my mind every time I listen to it. My Mojo is charged to the brink and I am empowered by what can only be described as the pinnacle of the human spirit. It is beyond beautiful, awe-inspiring and good. It is transcendent, a Midas touch to my very soul.

Trust me, listen to it!

Peace Out. Space Out. Black-Out.

SageDude Explorations: The VibeConquistadors of the Lost Bulgarian Gipsy Land

Vibe Report: The Primal Manifestation of my Inner Savage

Confessions of a Thoughtcriminal Part III: Locomotion of Stagnation